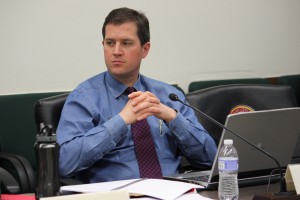 Oh no! Liberal golden boy state Sen. Andy Kerr has been spanked by the U.S. Supreme Court for trying to undo TABOR, which is the taxpayers bill of rights that requires taxpayer approval in order to raise taxes. The court’s ruling basically said that a select few legislators simply did not have the right to overturn a constitutional amendment, no matter how badly they want that fat cash for special interests. Ok, fine, we added that last part. But it’s true.

“I hope this decisive win will convince TABOR’s opponents that the courts are not the place to pursue their political agenda. However, my legal team and I will continue to defend taxpayers’ rights against legal challenge as long as we have to.”

While Team Kerr was told no, the court left open the possibility that a different set of plaintiffs (not legislators) could pursue a similar legal argument. Liberals just cannot wait to get their greedy paws on more taxpayer funds, so we don’t anticipate they will give up anytime soon.

The 10th Circuit Court of Appeals today vacated a legal challenge by some lawmakers to Colorado’s requirement for tax increases to receive voter approval. Washington Policy Center joined an amicus for the case in 2015 when it was before the U.S. Supreme Court.

The American Bar Association provides this summary of the case:

“Colorado state legislators sought to invalidate key provisions of the Colorado Taxpayers’ Bill of Rights (TABOR), claiming that those provisions interfered with their constitutional voting abilities and thus violated the Guarantee Clause of the federal constitution. Colorado Governor John Hickenlooper, the named party tasked with defending TABOR, argued that the legislators’ claims ought to be dismissed for lack of standing, and as nonjusticiable under the political question doctrine. The Tenth Circuit found that TABOR had caused actionable injury to the legislative plaintiffs by depriving them of their unique ability to affect Colorado tax policy by their votes, and (upon quick findings of causation and redressability) held that those plaintiffs possessed both Article III and prudential standing. The court held that a case-by-case approach to the political question doctrine was required by Baker v. Carr, and that the legislative plaintiffs’ Guarantee Clause claims were not barred as nonjusticiable by any of the six factors detailed in that case.”

The potential impact of this original ruling on voter approved fiscal restraints of any kind on lawmakers across the country was very troubling to us which is why WPC signed on to an amicus in the case when it was before the U.S. Supreme Court. On June 30, 2015, the Supreme Court granted our petition and vacated the prior judgment and remanded the case back to the 10th Circuit for further consideration in light of the ruling in Arizona State Legislature v. Arizona Independent Redistricting Comm (2015).

Today the 10th Circuit ruled that lawmakers challenging the Colorado tax restriction lacked standing as individual lawmakers. The court ruled that only the legislature as an institution could challenge Colorado’s constitutional tax restriction. Colorado is one of 17 states with some form of supermajority vote or voter-approval requirement for tax increases.

Washington voters going all the way back to 1979 with Initiative 62, have consistently called for a higher threshold to raise taxes. The state Supreme Court, however, has ruled that a supermajority requirement for tax increases can only be enacted via a constitutional amendment. A December poll conducted by Elway Research, INC found that 65% of Washington voters want lawmakers to act on such a constitutional amendment. Should voters finally get the chance to consider one, the federal courts have again made it clear the people have the right to restrict tax increases via their state constitutions.

“Today the Judiciary ruled in favor of the Taxpayer’s Bill of Rights (TABOR).  Opponents of TABOR had asked the federal courts to rule it unconstitutional.  Arguments about whether a full trial should even begin had been appealed all the way to the US Supreme Court.  That highest Court had directed the 10th Circuit located here in Denver to reconsider the case in light of more recent precedent.  With today’s decision by the 10th Circuit Court, it appears that this case will be dismissed and TABOR will survive unscathed.

Your TABOR Foundation joined a group of limited government proponents to file Friend-of-the Court briefs at each step in support of TABOR.  We were ably represented in that effort by the National Federation of Independent Business through its attorney, Luke Wake.

We can be grateful that the most existential threat to TABOR is gone, for now.  We should be diligent that the Leftists who want to repeal such limits on the growth of governments will try again in a different fashion.